Carl's take on the One Surf Fly – Mission Beach

When my alarm clock sounded off at 3am, I popped out of bed knowing that I was headed to the 8th One Surf Fly on May 2, 2015 at Mission Beach in San Diego.  Approximately 60 fly anglers fly fished this popular event.  There were also over a dozen volunteers who gave up the opportunity to fish and act as spotters and score keepers.

At this event, you bring a fly which is placed in a numbered plastic bag and then everyone takes a turn to draw a fly.  You must fish with that fly and if you lose it; you’re out.  As my name was called to draw a fly, I couldn’t help wonder what I would pick.  Would it be a 5” Clouser that any surf perch would find hard to swallow or a large Deceiver pattern which has no weighted eyes to get it down to the strike zone in the surf?  I was prepared with a small pair of scissors in case I had to give an oversized fly a haircut.  I was relieved to draw a small fly with large dumbbell eyes and red cactus chenille body but with only a few fibers for a tail.  Nevertheless, I was confident that some perch would find it irresistible.  However, when I was fishing I noticed that the dumbbell eyes were rotating.  Whoever tied the fly didn’t tie and SuperGlue the eyes on the shank.  Oh well…that’s part of the fun of this event.

It was an impressive and great sight to see all of the fly anglers lined up along the surf.  Prior to the start, I noticed the piles of kelp and eel grass on shore and in the water.  I knew that it was going to be a tough morning.

Shortly after I began to fish, my leader became tangled around my rod tip.  It was a mess and quickly decided that it would be faster to tie on a new leader.  I cut off the tangled mess and shoved it in my chest pack.  Then I retrieved my only spool of leader and was shocked to pull 2 feet of leader.  That was the end of the spool!  A time to improvise.  I salvaged as much line from the tangled mess and tied on the fresh piece.  My surf chest pack now has a full assortment of spools filled with leader.  Lesson learned!

At the end of the event, I was skunked as were many other fly fishers.  First fish was caught 12 minutes after the start by a young lady who left Phoenix, AZ at 10pm Friday, drove all night, and arrived early Saturday morning.  Oh…to be young again.  Biggest fish was a 21” corbina on an Al Q Beach Bug.  Most Fish (5 Barred Surf Perch) by one angler were all caught on a Krabby Patty.  There were only 35 fish caught in total (30 Barred Surf Perch, 4 Walleye Perch & 1 Corbina).  The fishing (and catching) was pretty slow compared to the previous year.

The entire group then headed to Peter Piconi’s So Cal Fly Shop for lunch, awards ceremony and raffle.  A great and fun event that brought members from many clubs together to enjoy the sport we love. 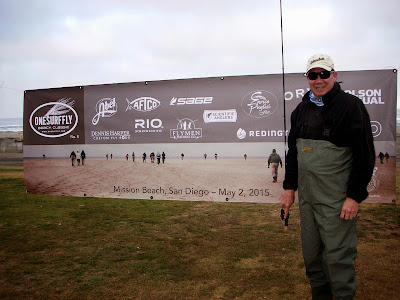